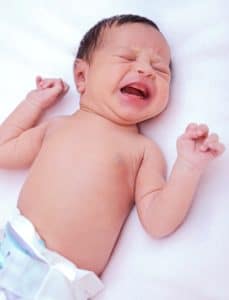 As a parent, especially a new parent, it can be overwhelming to meet all of your little one’s needs and know exactly what they do need in a given situation.  Are they hungry or tired?  Are they sick?  Is something really wrong or is this normal?  Spitting up is common among babies, but some infants spit up more than others.  How can you know if there is a bigger problem, such as infant GERD?  Before turning to medications or other invasive methods for your little one, first consider natural, safe, and effective care from a Charlotte chiropractor.  Chiropractic care is a great way to support your little one’s body as it is both a safe and natural method to help the body heal faster and function better.  It can also be the answer for why your baby is spitting up so much.

What Is Infant GERD?

GERD stands for gastroesophageal reflux disease.  In your infant, symptoms of GERD could include vomiting, refusing to eat, coughing that doesn’t go away, or excessive crying, especially right after a feeding.  The problem is that instead of the food going straight down the esophagus and into the stomach as it should, the food gets backed up and comes up the esophagus instead.  There is testing that can be done, but most often, infant GERD is diagnosed by recognizing signs and symptoms.  Doctors think that GERD in infants may be due to an underdeveloped digestive system.  For most babies, as the digestive system continue to develop, symptoms will usually go away on their own.  In the meantime, doctors may recommend medications to help with infant GERD, but these medications can cause a slew of unwanted side effects that may do more harm than good.  Instead, consider consulting a Charlotte chiropractor to find out how chiropractic can ease symptoms of infant GERD for your baby.

How Can Chiropractic Care Help with Infant GERD?

The body’s systems need to be able to communicate with one another in order to function efficiently.  The central nervous system is responsible for sending and receiving messages throughout the body.  Spinal misalignments can cause nerve interference that doesn’t allow for proper brain-body communication.  This, in turn, can cause health problems and dysfunction such as infant GERD.  Spinal misalignments specifically near the stomach or esophagus can affect the function of these body parts, leading to severe reflux.  Charlotte chiropractor Dr. Grant Lisetor will examine your baby for spinal misalignments and will gently correct any misalignments to restore the body’s ability to function at its highest level.  After spinal adjustments, many babies see a decrease or even full correction of GERD to bring about relief.

Has Chiropractic Worked for Others?

It is normal for parents to want to be protective of their child.  Thankfully, chiropractic is a safe and effective method for managing symptoms of infant GERD, even for the youngest babies. Dr. Lisetor has adjusted several newborns, some as young as less than a day old.  There are many case studies that explore the link between chiropractic care and relief from symptoms of infant GERD.  In one particular case study, a 3-month-old baby girl was brought in by her mother for interrupted sleep, intestinal issues, vomiting, excessive crying, and difficulty breastfeeding.  She had been diagnosed with infant GERD at 2 months but medications were not helping.  After regular visits to a chiropractor, her symptoms were completely alleviated.

If your baby has been diagnosed with infant GERD, chiropractic care can bring about long-lasting relief.  Schedule a consultation with Dr. Grant Lisetor of Greater Life Chiropractic to find out more about the incredible benefits of chiropractic care for your child.